Andrea Padovani was born in Verona, Italy in 1961. In 1980 he received a general certificate in bookkeeping, and in 1985 a degree in Political Science at the University of Bolagna.

Andrea worked for a plastic factory in the commercial marketing section, but in 1993 he decided to leave his business career to chase a dream and authentic passion. That is when he decided to become a full-time self taught professional painter.

In 1994 he had his first two important solo shows in Italy. By 1995 he had hung nine different one man shows in Italy, (Verona, Florence, Milan, Venice, Brescia, Lake of Garda).

In 1996 while the solo exhibitions were following one another in Italy, he started to display sculptures and small painted pieces of furniture in Berlin. During this year he also became involved in the fashion industry. He painted 12 paintings representing leisurwear and sportswear. These paintings were exhibited at the Palazzo Pitti and Florence during the “Pitti Uomo” fall collections. These paintings have been used as testimonial for a national advertising campaign in weekly and monthly fashion magazines.

In 1997 he had several more one man shows in Italy, Geneva and Berlin, with the support of the local Italian Cultural Institute. He also displayed in Singapore.

In 1998 Andrea moved to British Columbia. His work as been very well received in Canada, and he continues to do many more one man shows here in Canada.

“Focus your eyes and let my paintings be the entrance to your visual journey. Look through the window and see the light that emanates from the image. Come inside, take a seat on a chair or a stone, and smell the perfume of the meadows and flowers. Come inside, there is a beach reserved for you. Listen to the waves lapping on the shore. Try to visualize the boats and their sails on the horizon.” 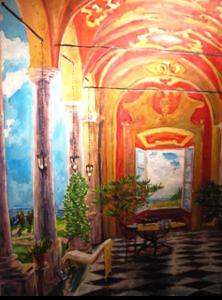 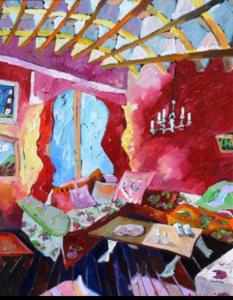