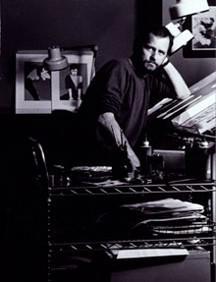 The Pop Art of Patrick Nagel needs little introduction. His minimalist style defined an era with cool, seductive women that became the most iconic of any single generation. His elegant graphic work and his portrayal of the contemporary woman made figurative design before him look instantly old. Today his unique sensibility and style continue to resonate with generations of young designers, illustrators and artists who have found inspiration from his trend-setting style.

Nagel was in the forefront of a new wave of illustration in Los Angeles in the late 1970’s
and early 80’s, re-imagining the graphic arts and in the process defining Los Angeles as the epicenter of award-winning visual arts. It was a reciprocal relationship; Los Angeles influenced his evolving style and in return he left his indelible mark on the city and far beyond. Through cultural cross-pollination, his work absorbed the moment – from the fashion photography of Guy Bourdin and Helmut Newton to influencing the look of music videos by David Bowie, Robert Palmer and George Michael, to creating the album cover art of Duran Duran.

Patrick Nagel was born in Dayton, Ohio in 1945 and was raised in Orange County, California. After returning from his tour in Viet Nam, he studied fine art at Chouinard Art Institute and California State University, Fullerton where he received his BA in 1969 in painting and graphic design. He then taught at Art Center College of Design while simultaneously establishing himself as a free-lance designer and illustrator with memorable ads for Ballantine Scotch, IBM and covers for Harper’s magazine.
In the mid-70’s he began illustrating stories for Playboy magazine, bringing instant exposure and a large appreciative audience to his work. His years working with Playboy established him as the heir apparent to 50’s pin-up artist Alberto Vargas and gave Nagel the subject matter that he would continue to use to illustrate the newly liberated woman.

Nagel’s woman is complicated - which is the key to her subliminal appeal. She wants attention, sometimes flauntingly, but remains distant. She appears intelligent, self-possessed, but removed. Nagel often said that he didn’t really want to know these women too well. He imagined them as creatures of the night who drank and smoked too much. Perhaps, but they remain always in control. In the pin-up tradition of women as object, Nagel’s portrayal of them was a break from the past, reflecting the rapidly changing role of women in America. His style evolved subtly along with the times. His women of the seventies are shown as softer, more vulnerable and innocent than his stronger, more self-assured women of the eighties.

The world of fashion and music have come full circle...back to the eighties; an appreciation of a flamboyant decade brimming with creative collaborations and groundbreaking art. Today, 25 years after the artist’s death, he is now considered one of the giants of American illustration with work in major collections and museums around the world. 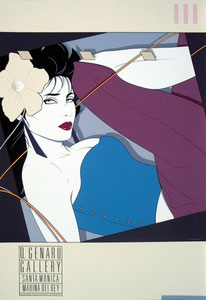 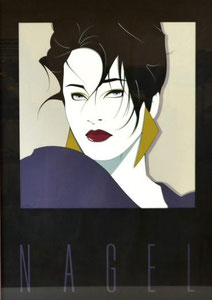