Born in Lima, Peru in 1942, Marquez Velazquez is one of the best-known and most prolific painters Peru has ever produced. He studied painting at the Escuela Nacional de Bellas Artes along with several well-known artists. He rejected the euphoria for "modern" painting and had to abandon his studies against his will. He also defied the traditional promotional system not participating from exhibitions he was specially invited to and selling his paintings out of his atelier. Despite his sense of rebellion, he is one of the best-loved artists because of his friendly character. Most of the artists interested in traditional painting have participated from his atelier. In several cases he has opted not to charge the student for his classes if the student could not afford it. Marquez Velazquez has created his own world and environment, where he does what he loves to do without compromising. 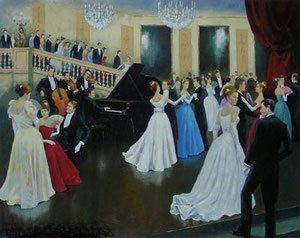